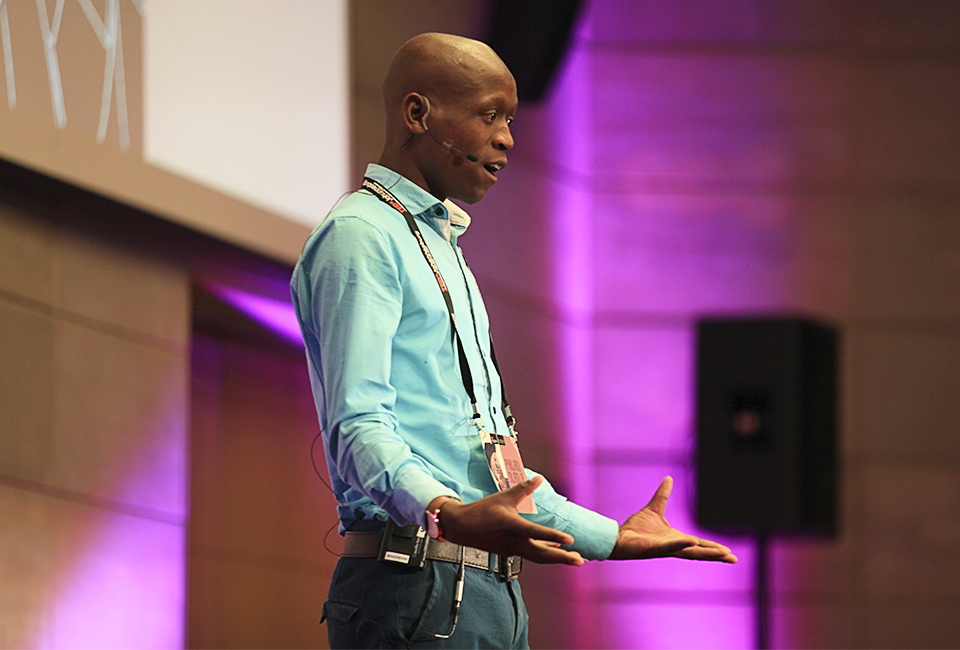 From addict to author and Changemaker

“If only people could read more, it would change the way they think,” says Philani Dladla – a former homeless drug addict.

Known as the Pavement Bookworm, Philani first found ‘fame’ by selling book reviews at traffic lights in Johannesburg. His influence has grown to include a kids’ book club for underprivileged youth, and he’s put pen to paper to write three inspirational books including one on mental health. “If you want to be a Changemaker, first make sure your mental health is in order. Then you can go out there and change the world,” advises Philani. “I’ve learned the true meaning of ‘where there’s a will, there’s a way’. You have to get out there, and never stop working on your dream.”

It all began when he was 12 years old and received a book from his mother’s employer. The book came with a generous challenge – one that would change Philani’s future forever.

It wasn’t a story book, or a tale of adventure. It wasn’t the usual sort of book one would give to a child to encourage him to read. But the book unlocked something inside Philani that influenced every step of his life from the day he opened the first page.

What exactly was ‘the book’?

It was Frederik van Zyl Slabbert’s “The Last White Parliament”. Philani was told that if he could read it, and provide an informed review of the book to his donor, he would one day receive the man’s entire library. And thus began his journey. Not only expanding his English skills, but his knowledge. Philani’s hunger for books was insatiable – with a particular love for history. He found freedom in the new perspectives that books offered, and he continued to read every book in the donor’s library. Eventually, he inherited the whole collection.

As a young adult, Philani fell in with a bad crowd, and all the words in the world couldn’t save him from drug addiction.
In his 20s, he found himself living under the Nelson Mandela Bridge in Johannesburg, with nothing to his name except his precious books.
Watching the other homeless addicts hustle for change at the traffic lights, Philani decided to do something a little different.

Standing at the traffic lights at the entrance to Wits University, he had just a few seconds to sum up a book for a motorist before they drove through the gate. The 5-second reviews worked so well that he expanded his business and started selling books too.
“This is how I made most of my friends,” recalls Philani. “We shared a few seconds of conversation before they drove past. I usually saw the same people every day, and so I added up those bits and pieces of conversation. Then I really got to know them, and once I knew them, it was easy to find and recommend books that they would love.”
He made such deep connections with his ‘readers’ that he’s still working with some of them today.
News of the “Pavement Bookworm” spread, and Philani became a local celebrity. He finally started to find his way back from drug addiction, and began piecing his life back together. (Watch his inspirational TEDx talk here).

He reads every book that he recommends

True to the original mandate from his first donor, Philani never reviews or recommends a book without reading it first.
“I have to know what I’m talking about,” he says. From academic tomes to romantic classics, and everything in between, he believes his investment pays off.
“That’s what makes it exciting. It’s not a hard job. You take three to four days to read one book, but you will sell the same title for the next 10 years. The book never expires.”
“I always try to figure out someone’s motive for reading a book. One time, I met a mom who was looking for Sweet Valley High books because she used to love them, and she wanted to build a connection with her daughter.”

Recommendation for the President of South Africa

Philani believes that South Africa’s President, Cyril Ramaphosa should read The Baby Mind Reader by Derek Ogilvie.
“I think it would speak to the President regarding what he’s facing in life right now. Sometimes people love you, sometimes they hate you. But there is always hope.”
The books that got him through the toughest times
While he considers every book to be a beloved friend, Philani says that when he is going through a tough time in his life, he turns to biographies.
“Reading about someone else’s journey and how they overcame their struggles gives me motivation,” he says. He also loves Don’t Sweat the Small Stuff by Richard Carlson. “It’s an easy read but it has really helped me a lot.”
Rick Warren’s The Purpose Driven Life encouraged Philani to question himself. “It helped me look at things like ‘why am I here?’, and ‘who am I?

Books saved his life, and now Philani is sharing his passion with the world. The Pavement Bookworm runs a number of book clubs for impoverished children. Books are donated and distributed to the kids who can’t afford to buy them.
“Knowledge is power. Understanding our history, understanding why things are the way they are can empower us,” says Philani. He particularly loves sharing the history of the African kings and queens with his young South African readers.
“Children don’t even know that one of the richest men in history was Mansa Musa – an African emperor. And that female equality was once the norm on our continent. There were many famous women rulers. Queen Anna Nzinga of Angola led men into battle for many years, and was victorious.”
“If only people could read more, it would change the way they think,” says Philani. “It would help to break a lot of prejudices.”

“If only people could read more, it would change the way they think,” says Philani. “It would help to break a lot of prejudices.”

In 2015, Philani had the courage to put pen to paper, and authored his first successful title The Pavement Bookworm – an inspiring tale of a young man who battled life’s difficulties and found hope.
“Holding that first published book in my hand felt like a dream becoming a reality. It’s a feeling that money can’t buy,” recalls Philani. He’s also written a captivating history book for children, which is ready to print and will be published by Jacana media. The book was inspired by conversations he had with kids in his readers’ club.
“They are so curious,” says Philani. “I love sharing knowledge and history with them so that they can understand the world around them. They ask me so many amazing questions, like ‘who was the richest person ever’, and ‘why don’t churches pay tax?’. Some of these questions you wouldn’t expect from a child, but they are hungry for answers. This book has the potential to become a lengthy series in the future!”

But the project Philani is most excited about is his latest autobiography, focussing on mental health. Tragically, the entire project suffered a major setback when Philani’s laptop and manuscript were stolen by an addict he was trying to help.
Devastated by the loss of his book and the thousands of hours he had invested into perfecting it, Philani battled a period of major depression. But through the help of a network of supporters, he is once again putting pen to paper to finish off his third book.
He believes that it will be a ‘Changemaker’, and will have a profound impact on its readers.
“I lost a lot of years and opportunities while I was an addict, but it did help me see life from a different side,” he says. “If I could go back to my younger self I would say, ‘doing drugs is the worst thing you can do to yourself. You don’t love yourself.’”
It was his journey towards learning to love himself that helped Philani turn his life around. “Hopelessness is the worst thing, and the most dangerous thing in your life. If you allow hopelessness to rule you, then you’re in danger. But hope can keep you going…”
He is confident that his book can help offer the hope people need to take the next step towards healing.
“It’s not just in poor communities that people feel helpless, and mental health issues are taboo. Even educated people are afraid to come out and say, ‘I’m battling’. But mental health needs to be spoken about, and we need to break the stigma,” says Philani.

To be a Changemaker you need to check yourself first, and have a willing heart

“If you want to be a Changemaker, first make sure your mental health is in order. Then you can go out there and change the world,” advises Philani.
“I’ve met thousands of people through this journey, and I have learned that a willing heart is better than a high profile and a big bank account,” says Philani. You can build connections, get on the right platforms, and put yourself out there, but unless you have a willing heart, you will not be able to make it through the setbacks.”
“You have to ask yourself, ‘do I really want this’?”
“I’ve learned the true meaning of ‘where there’s a will, there’s a way’. You have to get out there, and never stop working on your dream.”