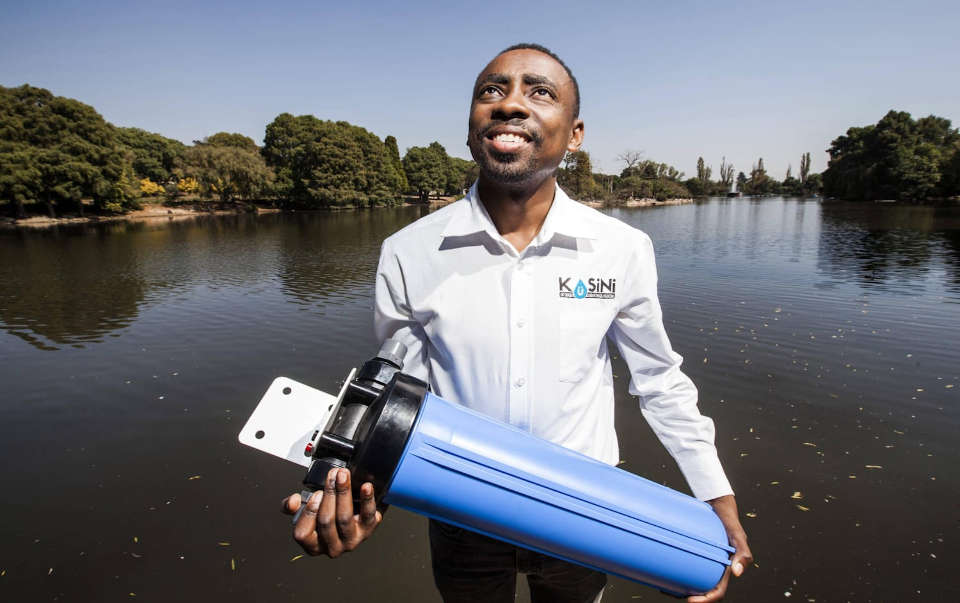 Clean water for all is Murendeni’s mission

“It’s a double edged sword. On the days I want to give up, I think about the seven communities relying on us for their clean water supply and am proud of this accomplishment but at the same time, this adds to my stress,” said philanthropic entrepreneur with a heart for people, Murendeni Mafumo.

Murendeni established a water purification business, Kusini Water, to provide clean water to informal settlements in South Africa, but his vision includes Africa and, indeed, the world. As a small fish in a big pond of corporates, Murendeni’s journey has been anything but easy, with much to learn and many setbacks, but he stays on course because “all people should have clean water to drink.”

Water is life and worldwide, more than one billion people lack access to a source of safe drinking water and sanitation and filtration systems are either too costly or difficult to maintain.

“We aim to change that,” said Cape Town CHANGEMAKER and entrepreneur with a philanthropic mindset, Murendeni Mafumo, who creates water purification systems to produce clean water for the poor.

Murendeni established Kusini Water, now in its fourth year, as a social enterprise that builds water treatment systems from nanotechnology and macadamia nut shells. In fact, what makes Murendeni stand out is this nut factor. “Globally, the best practice is charcoal and coconuts. But we looked at other material that has the same properties and decided on the macadamia nut shells. We source the nut shells from a small-scale farmer in Tshivenda,” he said. “The shells are not seen in the filter as they are incinerated and processed to form part of the system that cleans water from any source.” 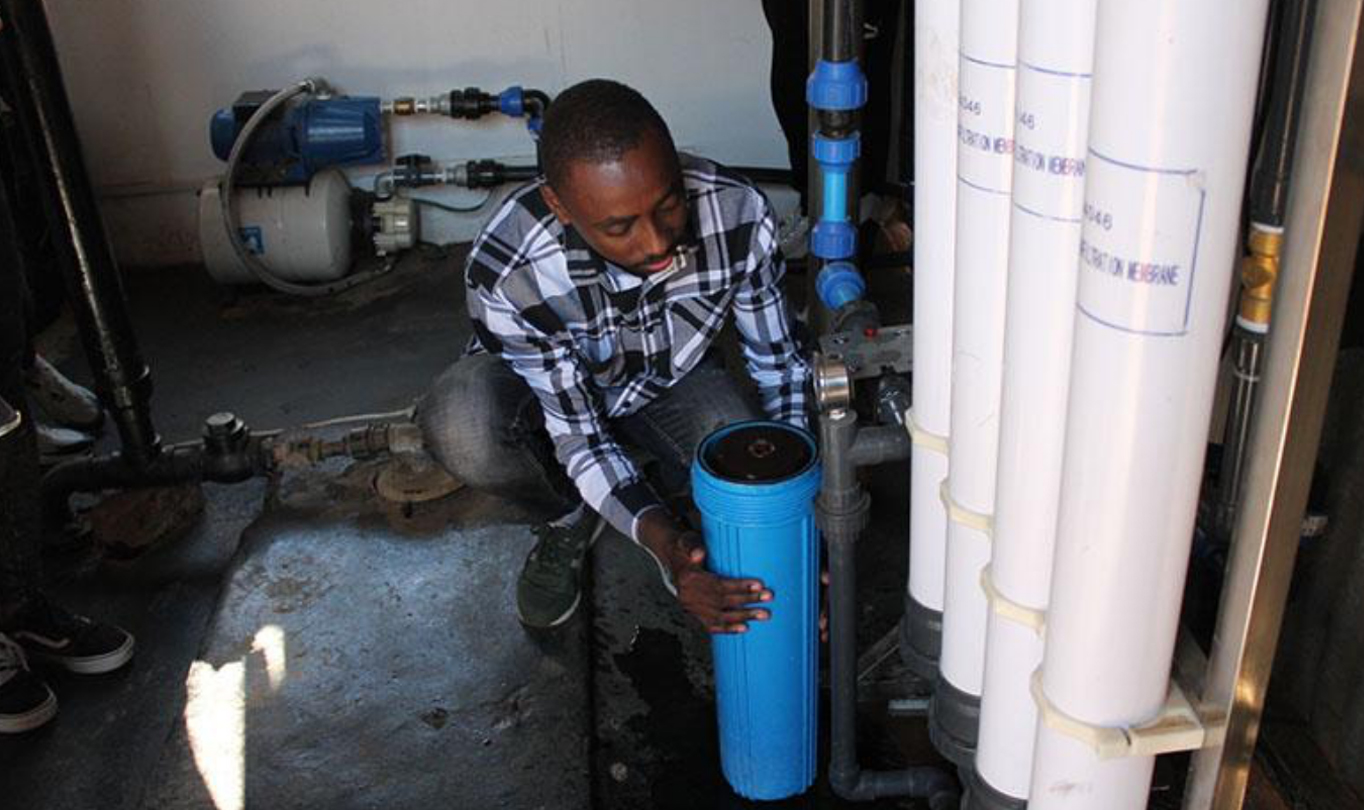 “Our systems bring clean, safe drinking water to people in rural, peri-urban and informal settlements throughout the African continent. Clean water helps keep kids in school as less time is spent collecting water for their families,” Murendeni said. “All our water systems comply with the South African drinking water Standard and are certified by an accredited laboratory. They are environmentally-friendly and energy sufficient.”

Murendeni worked at the water and sanitation departments in Johannesburg and Cape Town and was struck by blatant inequality. “After working at Jo’burg Water, one of the most striking things to witness was the urban population growing and the inequalities between neighbouring areas, when it comes to the availability of clean water.

“I wanted to do something about this and the idea evolved and developed over six years while I was working in the public sector,” he said.

He was haunted by the contrasting image of the lush area where he comes from and was spurred into action. “I named my company Kusini Water because Kusi means a small village in Tshivenda. Small villages are green with maize and tea plantations where springs bubble and clean streams meander throughout to nourish and feed. Kusini is the definition of Nirvana,” Murendeni said wistfully.

Armed with his belief in God and inspired by Richard Branson’s autobiography, Losing My Virginity, Murendeni took a leap of faith and resigned from his full-time job to put all his energy and time into creating a sustainable water purification system.

“Branson’s book was the first business book I ever read, and I have re-read it many times.” “YouTube and Google became my best friends. I studied and researched everything available about water purification,” said Murendeni who admitted he did not know what nanotechnology was and had to quickly familiarise himself with this concept and how to use it. Then he had to find investment. He applied for and received government grants, but the money for this ambitious project is eaten away quickly and he did not draw a salary for three years.

“There are no small companies in the water space,” he said. So, he relies on B2B multi-national companies buying his water systems to subsidise those for informal settlements. 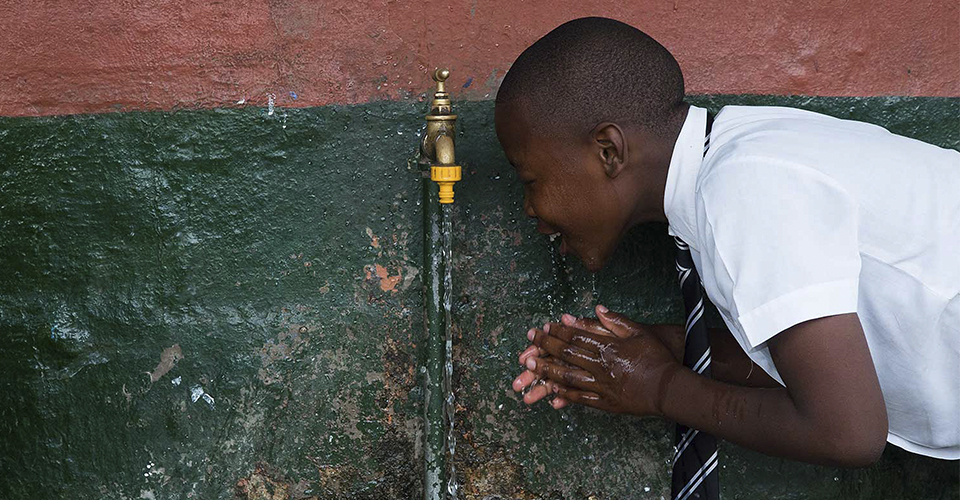 “We were part of the Red Bull Amaphiko programme which helps entrepreneurs “get wings”, and after that, we started supplying water for their building and their events,” Murendeni said.

Waves of Relief and Pressure

When the first system was built and installed, Murendeni said he felt a mixture of relief and elevated anxiety. “The first launch was very stressful as launching meant more pressure: pressure for it to work and for the people we serve to have sustainable clean water.” When life places stones in your path, be the water.

A persistent drop of water will wear away even the hardest stone – Autumn Morning Star, and Marendeni can attest to this. He said there were many days he wanted to give up but thinks of the children running to the tap for a drink of clean water. “Then I feel a big sense of responsibility and I am re-energised to persevere.”

An introvert and dedicated family man, Murendeni’s day begins straight after dropping his young daughter at school. Two days a week are dedicated to site visits, and the other days he may work from home, or at coffee shops.

Persian poet, Rumi said: When you do things from your soul, you feel a river moving in you, a joy. This is how Murendeni feels because his motivation is helping the people and his river, his vision, “is to provide five million people all over Africa with clean water, because of us”.