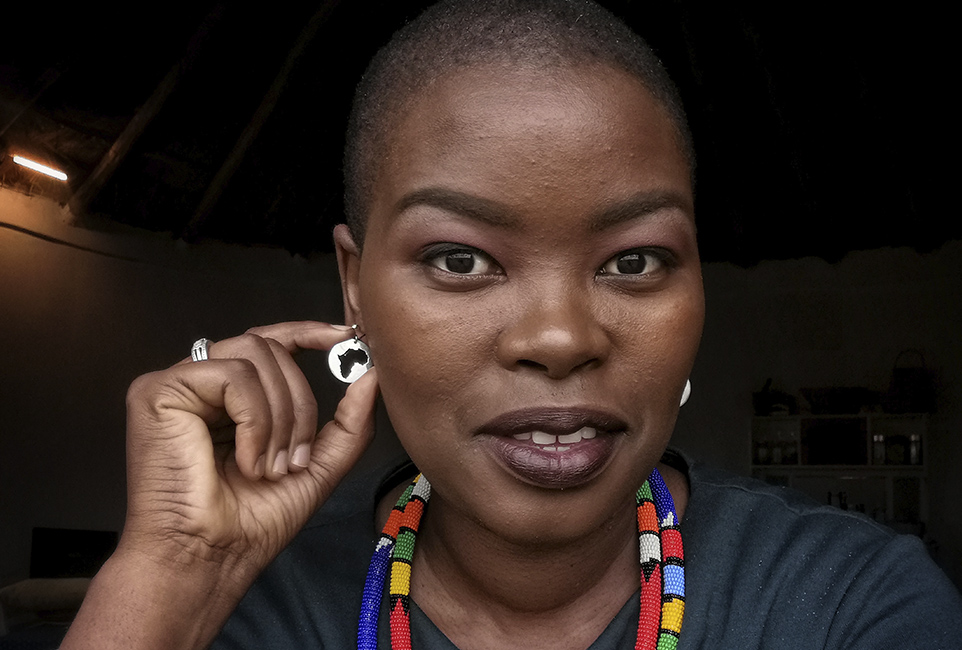 Pioneer, agriculturalist and author: Changing the world one dream at a time

“Not many people are pioneers or changemakers. It’s not easy. I don’t know where my path is going to take me. I might fail, and I might succeed.”

These are the words of Hombakazi Mercy Nqandeka – a woman on a mission to play her part to ensure that she leaves the world better than she found it. After earning a scholarship to study agriculture abroad, she has returned home to Mqele – her rural village in Elliotdale, around 25km from Bulungula in South Africa to share her knowledge and skills. For now, she is implementing water and sanitation related projects in rural communities, but her future plans are limitless. Hombakazi Mercy Nqandeka is a true pioneer, changemaker, and inspiration.

Hombakazi Mercy Nqandeka always knew she would be a Changemaker.

Not content to follow her peers, or the expectations of society, she forged her own path from the very beginning. Now she’s at the forefront writing books, leading through example by producing her own food, and working with Viva con Agua South Africa to ensure that children in rural South African villages get access to clean water and sanitation.

“I don’t like trends,” she laughs. “I watched my peers finish school, study, get a job, buy a car, find their own place to stay, have a child… This is such an automated life. But I’m an adventurous person. If others go right, I’ll go left.” 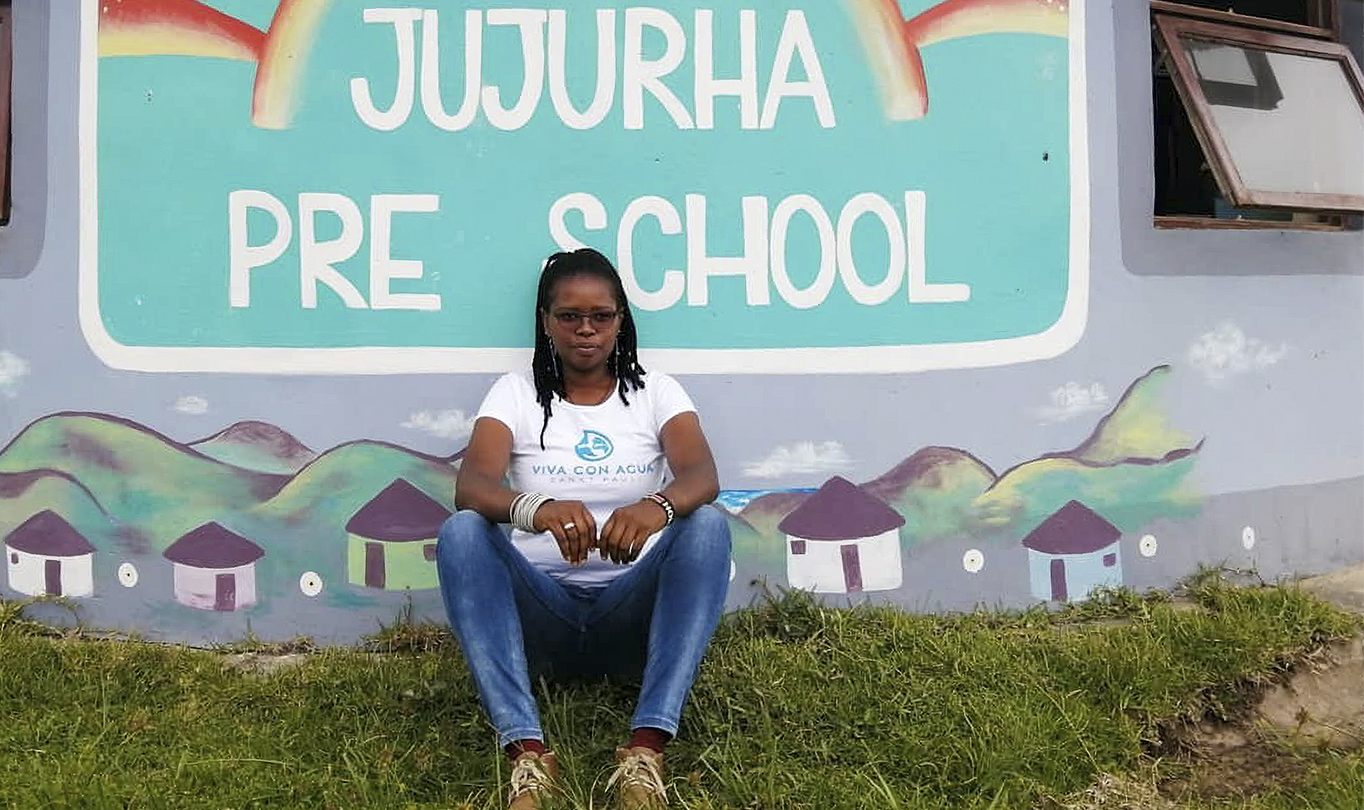 Food for the mind and body

Growing up, Hombakazi always had her head buried in a book – living vicariously and enviously through the adventures of the characters.
And if she wasn’t reading, she was farming.

Widowed at 33, and with four hungry mouths to feed, Hombakazi’s mother, Lindiwe Nqandeka grew all the family’s fresh produce on their small plot in their front garden of her one rondavel home. The rondavel was built in Mqele – a rural village in Elliotdale near the Wild Coast of South Africa.

During the week, she would go into the city for work while mamTolo, Hombakazi’s paternal grandmother helped care for the children.
Over the weekend, everyone would help in the garden: weeding, planting, and watering.

“This is where my love of agriculture and sustainable living began to grow,” recalls Hombakazi.

Hombakazi’s mother managed to put all her children through high school, and after matriculating, Hombakazi enrolled at the University of Fort Hare to study agriculture.

“I enrolled in 2008, entering a very male-dominated Agriculture department. More than 90% of our lecturers were males at the time,” recalls Hombakazi.  But despite having limited role models in her first year, she thrived.

“I stayed in res, and absolutely loved having unlimited access to the libraries and computer labs. I got my bachelor’s degree, then went on to do my honours, and finally got enrolled for my master’s in soil science.”

While still working on her master’s degree at Fort hare, Hombakazi applied for a scholarship which was offered through the university’s collaboration with Campus de France awarded by French embassy in South Africa. In 2016, she was the only student from Fort Hare awarded the scholarship. The double-master’s scholarship led her to Ireland, and then to France where she had to learn to speak French at the same time as studying. She then completed her thesis in Uganda.

“It was an incredible time,” she recalls. “I was able to travel Europe and have the adventures I always used to read about in books!”

She also met some inspiring women in the male-dominated field.

“When I went abroad, the industry was still male-dominated. But the few women I met were absolute inspirations. I looked up to them and was so empowered by them. Those women played a huge role in grooming me as a person and helping me become who I am today.”

There’s a different world out there

Coming from the ‘Rainbow Nation’ of South Africa – where non-white citizens endured decades of horrific oppression under the apartheid regime, Hombakazi’s eyes were opened to a whole new world in her international travels. “Going to Ireland – which is predominantly white – I thought I would be treated the same way as I was at home,” she says. But she was surprised by the lack of prejudice towards her. This prompted her to do some more in-depth research into the history of South Africa.

“I started digging, reading, watching documentaries, and I was shocked by what I learned,” says Hombakazi. She was motivated to write an autobiography, The Dissonant Rainbow, detailing her experiences, and offering solutions for better racial integration. “In this book, you’ll discover the real experience of being black in South Africa compared to being black in the rest of the world.” 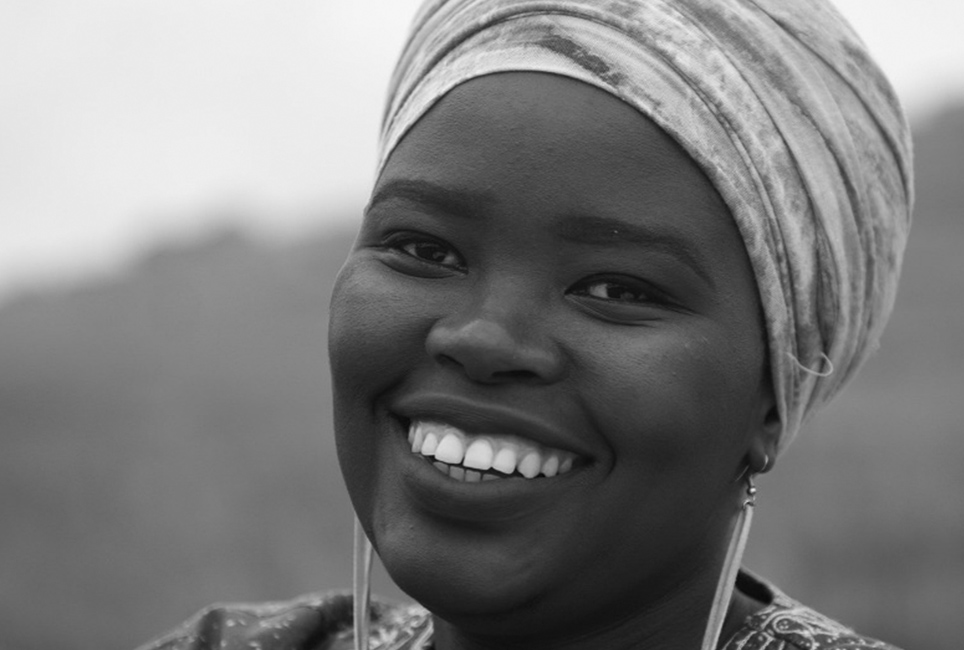 Viva con Agua has a broad implementation strategy. “We don’t just come into a village with a ‘saviour’ mentality,” says Hombakazi. “We look at the entire situation holistically from the community’s needs to how the sanitation is being handled at a management level. When we leave, the village not only has the facilities, but the knowledge and skills to continue to manage the facilities way into the future.”

They drive behaviour change using Universal Languages (ULA), those are sport, investing in local football teams and art, painting, music, and drama.
“We teach the principles of water and sanitation through inspiring joy.”

“Seeing children in schools celebrate their new toilet facilities is beautiful,” smiles Hombakazi. “In many of the village schools, the current facilities are not in their best conditions., full of sewerage, and dangerously unhygienic. Through our programme, we restore access to water and sanitation, and we restore dignity.”

But Hombakazi’s dreams of leaving the world a better place doesn’t end here. She still has ambitious plans.
“One day I’d love to be a diplomat, or an ambassador for South Africa. I still want to build my knowledge and capacitate myself for that field.
I also want to travel. I see myself living in Senegal, and other countries in East Africa where I can use my skills to make a difference.
Now that I can speak a bit of French, I am very interested visiting francophone countries.”

Hombakazi is a pioneer. She is a woman who follows her heart and her dreams and forges her own future. At the same time, she has a passion for impacting and uplifting communities.

“Being a changemaker means setting a trend. You create a path, and you walk it no matter what. You take the road less travelled” says Hombakazi.

“Not many people are pioneers or changemakers. It’s not easy. I don’t know where my path is going to take me. I might fail, and I might succeed.
But I believe that we should work towards creating the world we wish we had lived in when we were younger.
We need to leave the world a better place for future generations.” 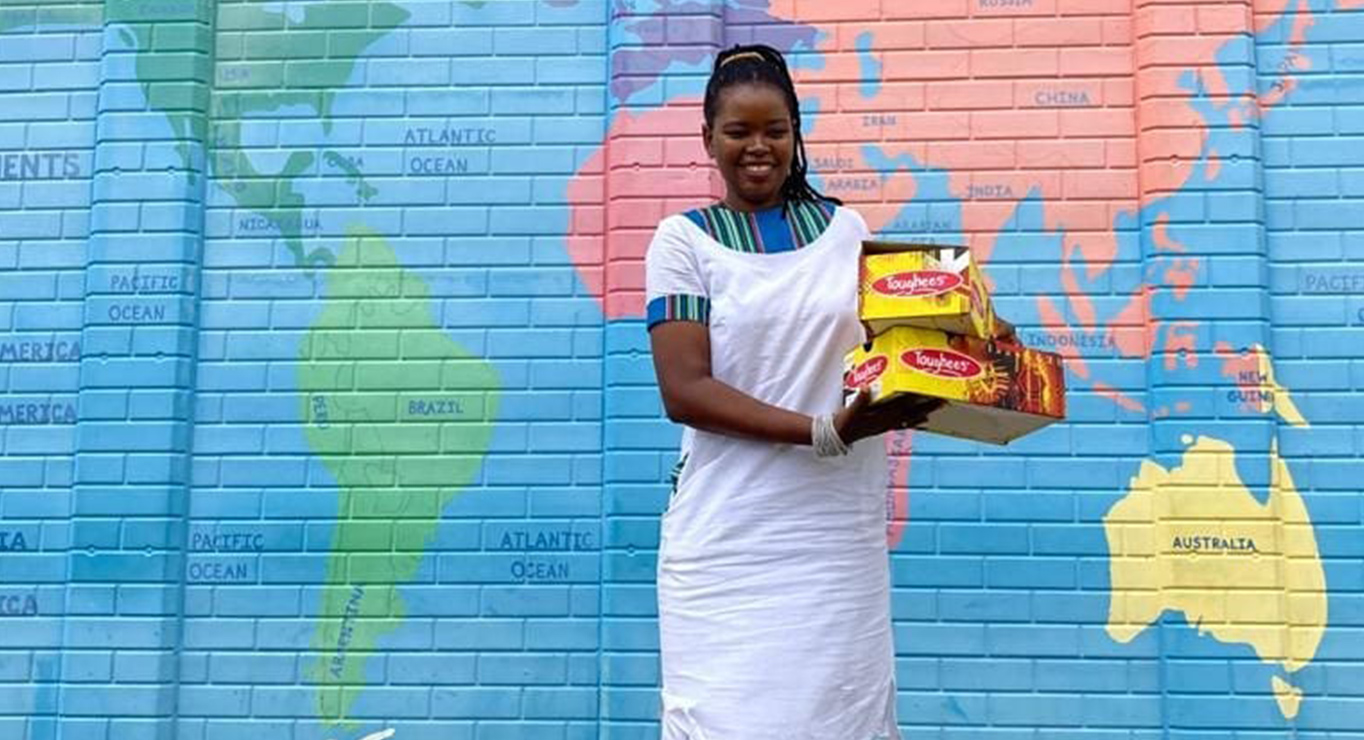