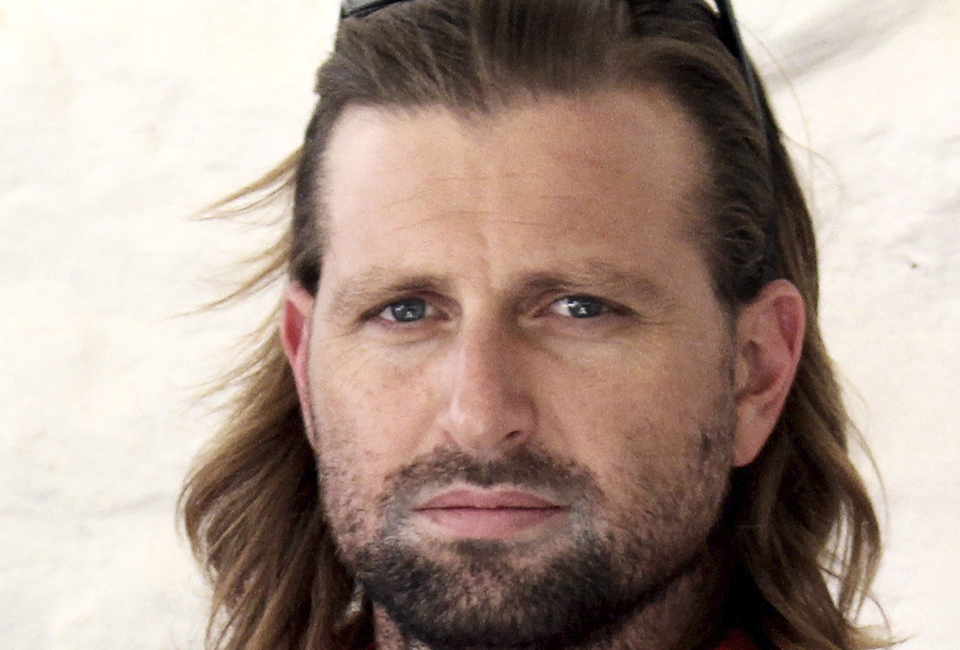 “It takes us at least four years to teach a child to a point where they can surf any wave the ocean throws at them,” said the founding father of the NPO, The Surfer Kids, Hermann Vivier.

“If you’re surfing serious waves and paddling for a wave, you’re guaranteed to fail unless there’s 100 per cent commitment toward pushing yourself over the ledge and into the drop.” This is reiterated in the NPO’s mission statement: The empowerment of marginalized and impoverished youths through character-building activities that teach commitment and dedication.

When you watch a surfer pit his skills on the waves and charge through a barrel, you are drawn into the very ecstasy of his ride and you can feel there is something transcendental about the experience.

This is what Changemaker Hermann Vivier shares with marginalised children, living in a village near Frieersheim in the Mossel Bay area, as the father of the NPO, The Surfer Kids.  Hermann and his wife, Jenya, run a tourism business, Unravel Surf Travel, which they co-founded alongside The Surfer Kids in 2010. – with a strong focus on women and children.

Noticing the children wandering around the dusty and dreary village with no stimulation, Hermann felt a calling to help using his skills and the sport he loves.
“My mother introduced me to the ocean when I was five and I started surfing when I was nine.
She bought me an old single, Safari spider surfboard – I’d never forgotten that dull green board with a bright pink fin,” Hermann said.
“Surfing taught me that reward lies on the other side of life’s challenges. The ocean is impartial. It doesn’t do anyone any favours. It doesn’t care about who you are, what your history is, or what baggage you carry.
“It treats everyone the same. It will challenge you and, if you put in the effort, it will reward you. It also taught me to respect nature as a force that’s much bigger and more far-reaching than what the human mind can comprehend,” he said.

Setting up The Surfer Kids was not an easy ride and Herman faced an uphill battle to get the NPO off the ground.

“Funding and bureaucracy were our two biggest challenges at the outset and has remained so. With regards to bureaucracy, I understand that there are overly opportunistic people out there. And I understand that government wants to ensure they do not exploit the vulnerable.,” said Hermann.

“But unfortunately the reality is that, first of all, the maze of red tape the government has created does not prevent that from happening. And at the same time, it makes it very difficult for individuals without resources to start making a difference while implementing the proper organisational structures.

“With funding, on the other hand, it’s understandable that convincing people to donate is never going to be easy.”

Hermann said it becomes even more difficult if you’re a relatively small organisation that exists on the fringes of society’s peripheral vision.  “We’ve never had more than 40 children active in our programme and for those kids what we do makes the world of difference, but in the bigger scheme of things (there being millions of children that need help) that can seem insignificant.”

Building the future from the bottom up

Despite the difficulties, there have been many accomplishments to be proud of.

“Just surviving for 10 years is bigger than anything else. If you’ve never started and sustained a grassroots non-profit organisation, working with society’s poorest people, there’s no way to explain what kind of effort it requires,” said Hermann.

“We’ve also had some success at a national competitive level. Children from our programme earned medals at the South African Grommet Games in 2017 and 2019. And following that, we were nominated by Surfing South Africa, the sport’s governing body in South Africa, for an SA Sports Award in 2019.

Catching waves of dudes and dudettes

The Surfer Kids is a well-planned and orchestrated organisation. When you are working with children, it has to be.

“We recruit children between the ages of six and eight for boys, and six and 10 for girls. We start them as young as possible because we feel that the earlier we begin, the more of a positive influence we can have on the child’s development.”

And, there is a lot more Hermann and his team have to contend with.

“We’re working against a lot of negative influences from their environment such as drugs, neglect, apathy, violence and so on. And beyond a certain age, it becomes a lot more difficult to have an impact.

And it’s not that we don’t want to work with older kids, but we’re already at full capacity recruiting from the younger age group. We feel that we’d rather focus there, where we can have a longer-lasting impact.”

“Because we recruit children so young, they are introduced to surfing very, very slowly.”

In the beginning, they simply play around in the shallows. There is no access to a swimming pool so children learn to swim in the process of learning to surf. To an outsider, it is difficult to understand.

“But we’ve been doing it this way for years and have a 100 per cent safety record with the children, many of whom have progressed to become highly skilled surfers,” he said. All the coaches are qualified and experienced lifeguards and they pass that knowledge on to the children. Safety in the ocean is the number one priority. “We understand, better than anyone.” 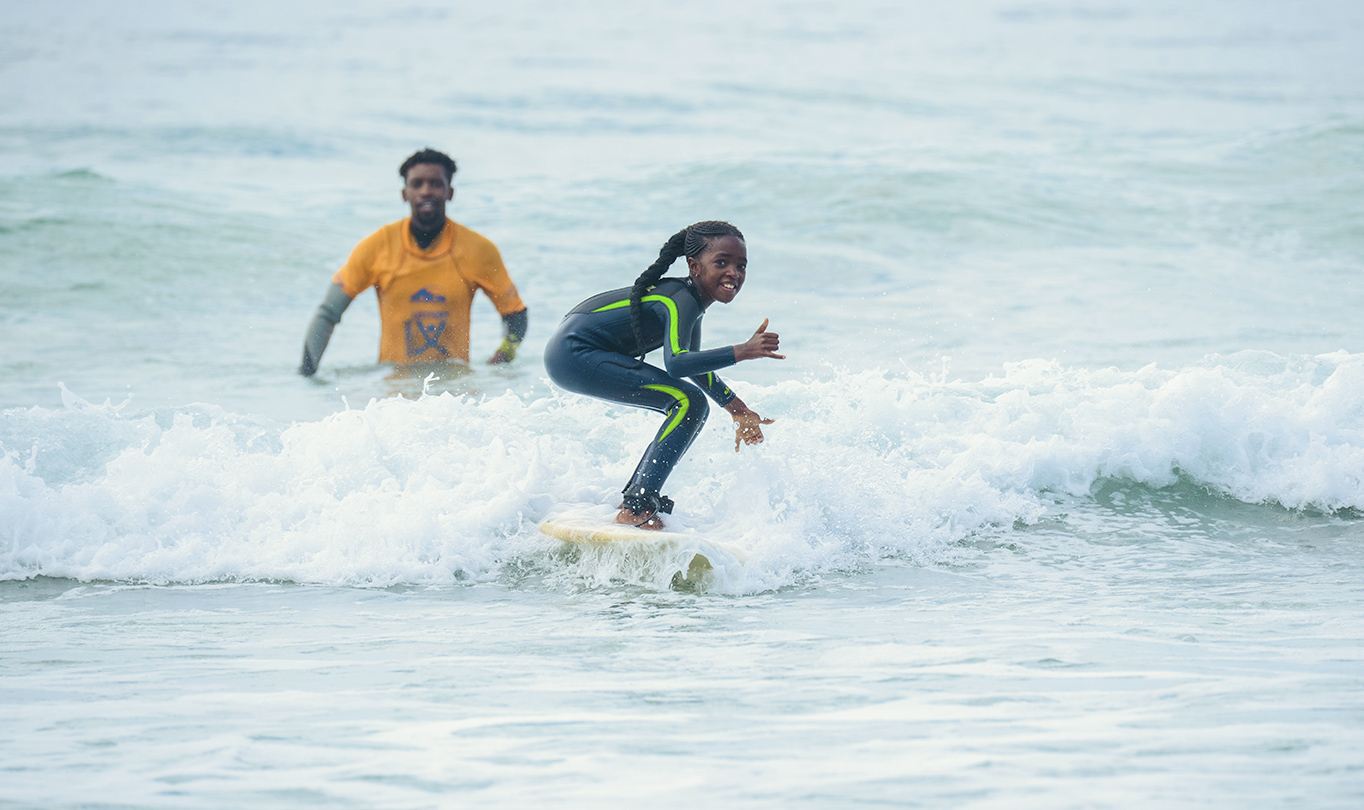 Diaz Beach is the area’s prime surfing beach and this is where Hermann set up their permanent headquarters: a small beach-front building rented from the local municipality. This is where equipment is stored, admin is done and food prepared for the children in a small kitchen.

The centre has an active internet connection sponsored by a local ISP and a small workspace with a few laptops where the children are assisted with their homework.

“Our food supplies, since early 2021, have been sponsored by an after-school feeding scheme, The Lunchbox Fund.”

“We chose Diaz Beach as it offers the best quality beach break surf within about a 100-kilometre radius. And, one of Mossel Bay’s poorest townships is located within easy walking distance of Diaz Beach which means there is no need for transport.” 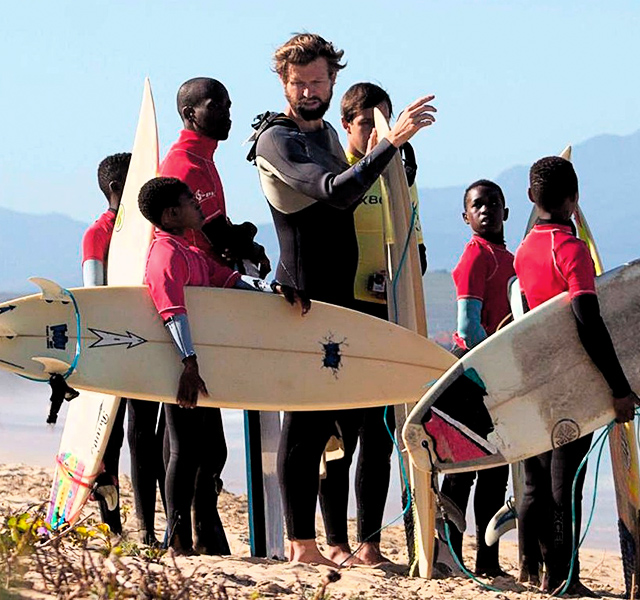 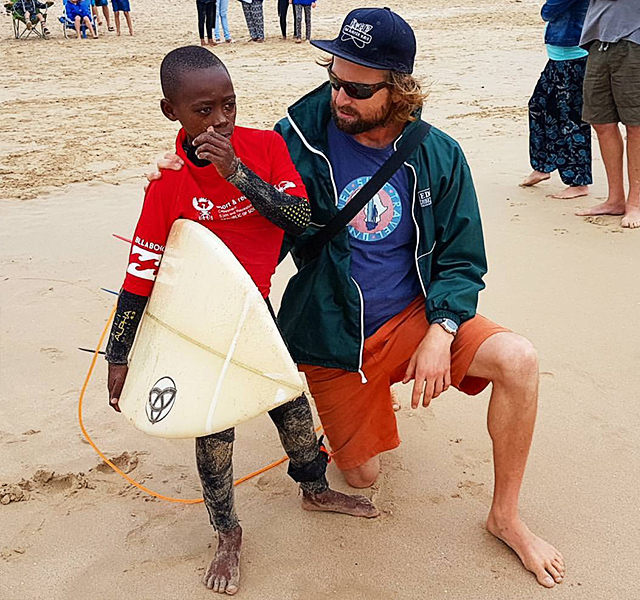 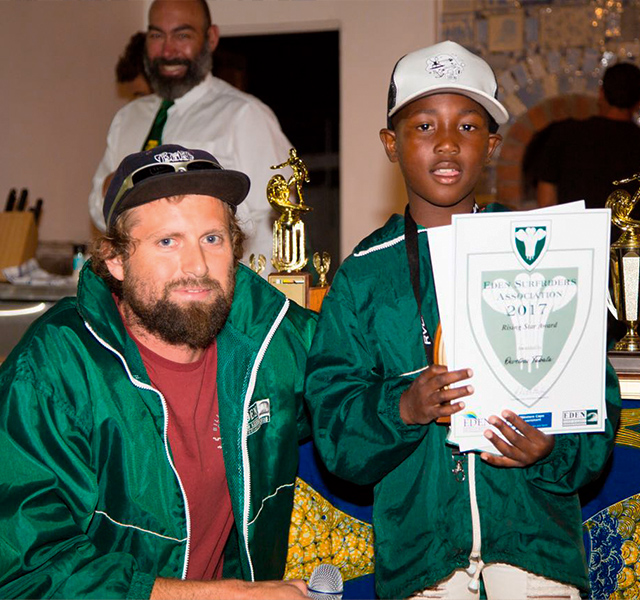 Stoked at the swell rewards

Introducing children who have little or no extracurricular activities to surfing, is rewarding. “It’s good to see their progress, growth and development,” Hermann said.

“The programme we run is a long-term development one. We can’t replace their parents, but we can instill values over time. You can’t raise a child within a week, a month, or a year. Seeing the older kids master a very difficult skill is incredibly rewarding.”

“It is also very educational for me. I keep learning to accept that different people learn at a different pace and that my expectation of reality is, more often than not, unrealistic. It’s a humbling experience to have to adjust one’s expectations.”

Hermann tries to live up to his ideals and is a stickler for following through on commitments. “I try and avoid undertaking something if I know I can’t sustain the effort in the long run. It’s all about commitment for the children, too. That’s the only thing that they can control that really matters and successful people have this in common.

That and enjoy the transcendental ecstasy of riding a wave and being one with nature.