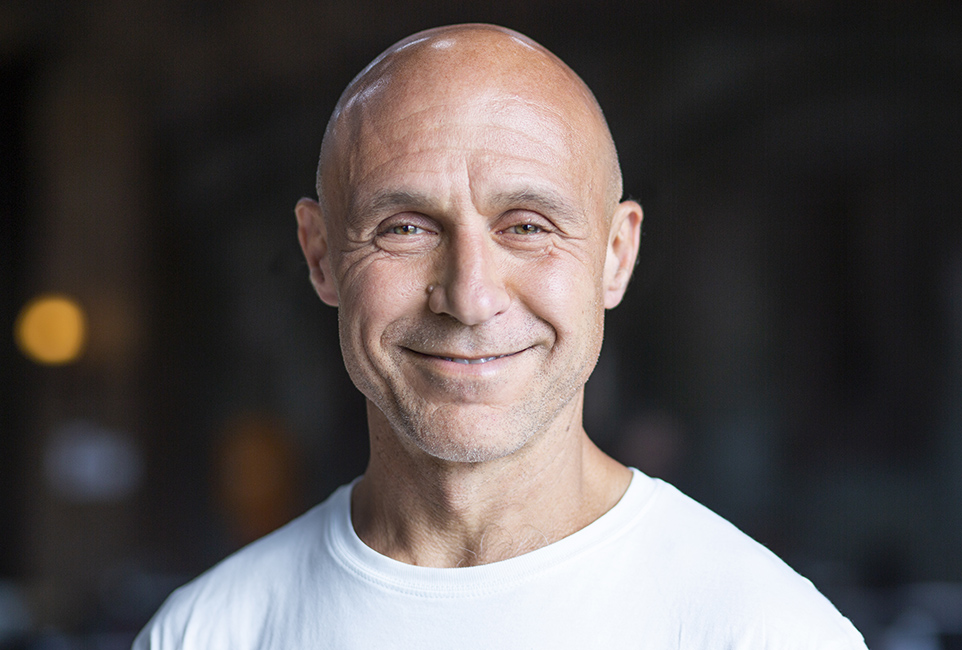 A Love Activist who restores dignity

On the day that Danny Diliberto gave away his first cup of soup, he finally understood the life path he had to take. “We’re living in a crazy world,” he says. “One that needs our love. If we don’t operate from a place of love, then there’s no point in pursuing change.”

One cup of soup became a hundred cups of soup. A hundred cups became a thousand. And during the Coronavirus pandemic, Danny’s Ladles of Love organisation became one of the key role-players in helping to source and distribute meals to millions of homeless and vulnerable communities in South Africa. This is the power of love.

Growing up in a Mediterranean household where food was an expression of love, Danny Diliberto believes that a wholesome meal provides more than just satiety. It restores human dignity.

As a child, Danny recalls sharing the contents of his generous lunch box with fellow learners. Today he distributes hundreds of tons of fresh produce and essential groceries to thousands of impoverished families every month.

How did he find his way here?

After completing his schooling in Johannesburg at 17 years old, Danny set out to find employment.
“I decided to look for opportunities in the restaurant trade, and I was given a job as a barman,” he recalls. “I never really planned it, it all just happened. I started out in the industry and stayed! The bug bit.”

He worked his way up through the ranks, developing a reputation as a respected restauranteur. Danny eventually left Johannesburg in 2006 to travel around the world but returned to South Africa and settled in Cape Town in 2008.

It was while he was managing a popular restaurant called Doppio Zero that Danny’s life changed forever. He attended a wellness workshop on breathing and meditation by an organisation called The Art of Living where he was introduced to the concept of Seva.
“It’s about giving of yourself wanting nothing in return,” explains Danny. “It really resonated with me. I feel like it was one of those ‘godly conversations’ that just speak to your entire being. This profound message spoke through my teacher, and everything just seemed to roll into place.”
One of the assignments of the workshop was to serve a cup of tea to someone in need.
“As the manager of a restaurant, I suggested that we make soup instead,” recalls Danny. “While we were handing out the cups of soup, I met a homeless man who was under the influence. As I handed him the soup, he came back to himself. He became grounded and polite and when I walked away, he returned to the head space he was in. This was an immensely powerful moment for me when I realised that if an interaction and a bowl of fresh nutritious soup could restore a person’s dignity even for a moment then this is what I had to do.”

The beginning of Ladles of Love

“On that day, I knew my life would be different. It was such a deep knowing, and a sense of the future. I knew we were going to start a soup kitchen.
And I knew that from one pot of soup, it was going to become a full-time operation. It all just clicked for me. I had a restaurant with a big kitchen and staff and lots of homeless people in the city. This was the most logical route to follow, and so we served our first soup kitchen in July 2014,” says Danny.

While many people would feel intimidated by the responsibility that lay ahead, Danny embraced it with passion and dedication, and he called it Ladles of Love.
“It didn’t feel overwhelming. I just knew I had to do it. I just started with one soup kitchen and grew the organisation one soup kitchen at a time. As it grew, I grew with it.”
Danny realised that people naturally want to help, but don’t know how to. So, he built Ladles of Love into an organisation structured around volunteers.
“I made volunteering ‘easy’ by offering a lot of options for people to help out,” says Danny.

Today, South Africans and international supporters can donate financially, volunteer their time, donate groceries, contribute towards the sandwich drive, or raise funds for Ladles of Love and their various projects.

When the Coronavirus pandemic hit the world in 2020, Ladles of Love was already a thriving organisation, serving around 15,000 meals every month.
But the day that South Africa’s President Cyril Ramaphosa announced Level 5 Hard Lockdown, Danny realised that the organisation would have to ramp up its activities like never before.
“I just knew that we would play a critical role in providing lifesaving meals to millions,” says Danny.
He didn’t have a plan, or the finances, or the facilities.
“I will never forget that moment. It was extremely powerful and peaceful at the same time. I just knew I had to get tons of food, and it was urgent! And now look at us – we’ve done it!” He recalled what his teacher had shared at the wellness workshop. “When you perform Seva, two things happen. One: you will always be provided for. Two: as you take on more, your shoulders will grow with the responsibility.”
“This is exactly what Ladles of Love is all about,” says Danny. “I’ve been able to take on more and more and more, and we have always been provided for.” As the pandemic swept through the nation, the generosity of donors flooded the organisation. “To say I was overwhelmed by people’s response is an understatement,” says Danny.

“I just have the utmost gratitude towards everyone who trusted me and Ladles of Love and chose
to walk with. I often pinch myself,” says Danny. 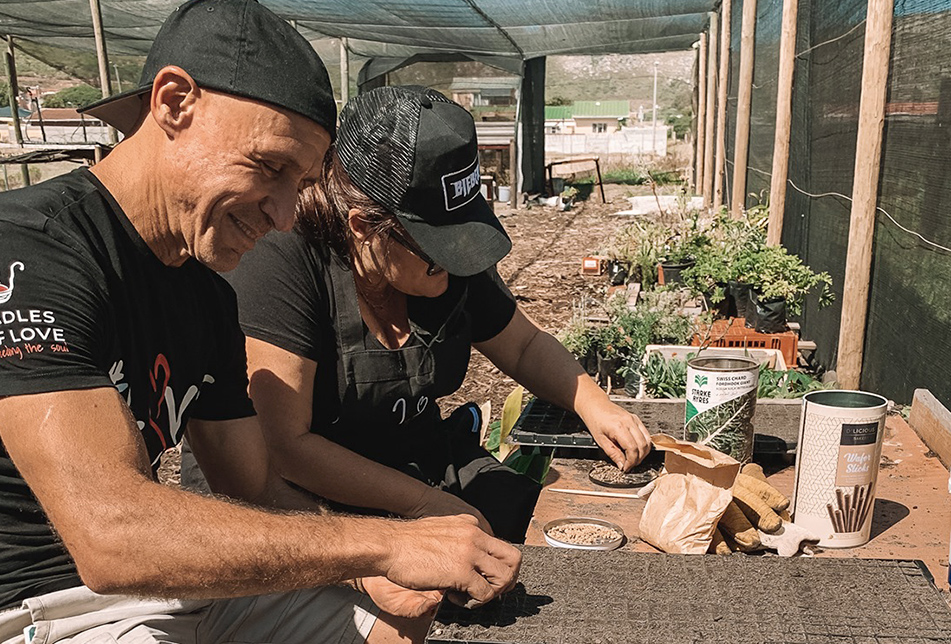 During the pandemic, Ladles of Love had to adapt and innovate to comply with Covid-19 regulations. They began sourcing and purchasing essential groceries for community organisations that were cooking and distributing food to homeless shelters and impoverished neighbourhoods in Cape Town.

Ladles of Love needed a base of operations that could deal with the enormous amount of food being delivered and distributed. They were offered the 2,600 square metre (around 28,000 square foot) exhibition all at Cape Town’s Grand West Casino which is now their temporary warehouse and headquarters. The entire operation is managed by a core team of 25 dedicated staff who source,
allocate and pack bulk food supplies for hundreds of vetted soup kitchens, schools, and community organisations in the Western Cape area. The team is also supported by many dedicated volunteers.
“The bulk food supplies vary in size, depending on the needs of the community that the organisation serves,” explains Danny.
“One of the organisations receives 7 tons (around 14,000 pounds) of food a week.”

In 2020, Ladles of Love also started making and distributing sandwiches. South Africans around the country contributed towards the project by making sandwiches at home and dropping them off at dedicated depots, or donating towards the costs of purchasing bread, peanut butter, and jam.
“Since we began, we’ve made around 4.5 million sandwiches,” smiles Danny. “We’re still making about 2,000 per day. This has dropped quite a bit. In the midst of the pandemic, we were distributing around 20,000 per day.” They even set a World Record, making 304,583 sandwiches in one hour!
As the lockdown regulations have eased up, Ladles of Love has also ramped up its own soup kitchens again. “When we start something, we commit,” says Danny. 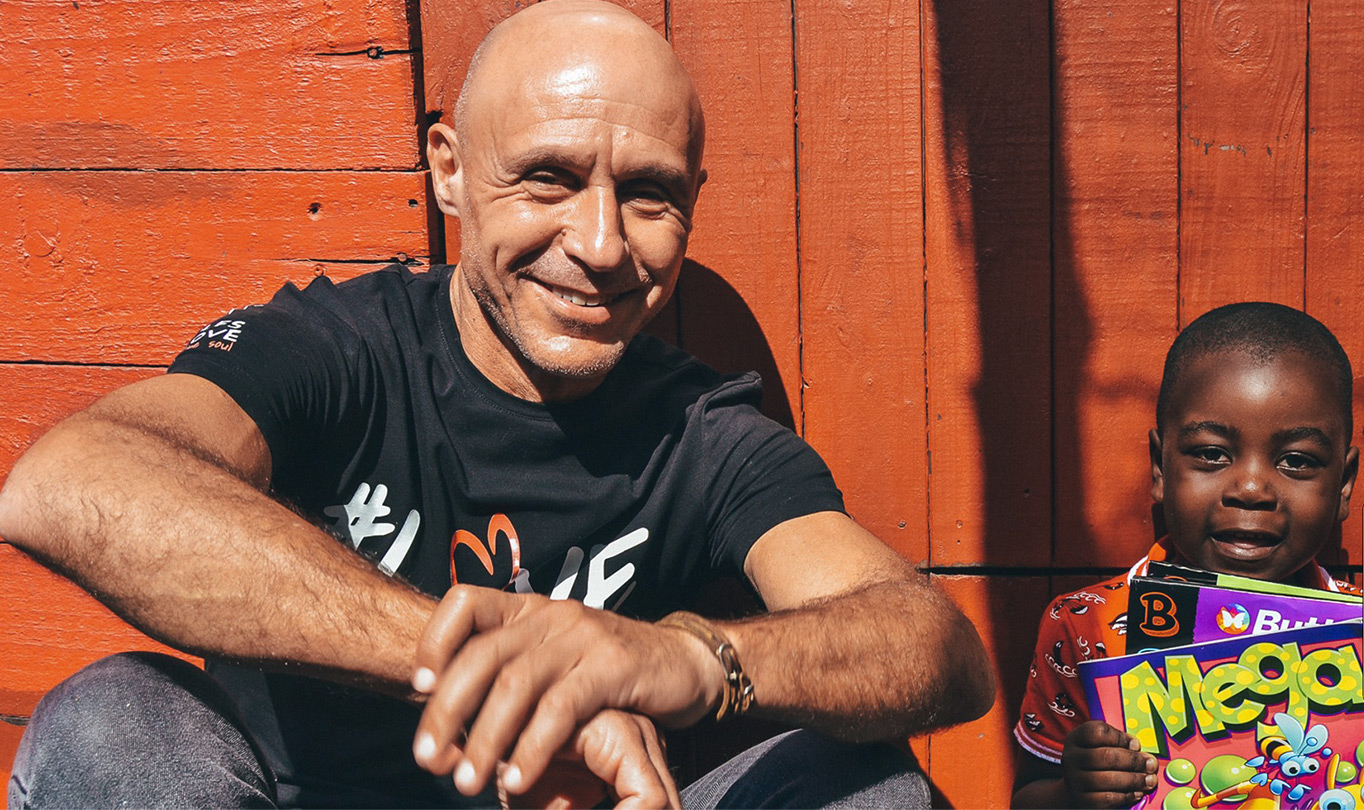 The need continues to grow

Over a year into the Coronavirus pandemic, the demand for help from Ladles of Love has not diminished. In fact, it continues to grow.
“I get messages every single day from our beneficiaries asking for more,” says Danny whose day typically begins at 5AM. After spending an hour in meditation, and enjoying a run outside in nature, he heads out to the Grand West warehouse where he coordinates and manages the responsibility of filling thousands of hungry stomachs.
Currently, Ladles of Love sources, funds, and distributes around 45 tons of food (around 90,000 pounds) – equivalent to 400,000 meals every week.
Since the beginning of South Africa’s Level 5 lockdown, the organisation has served over 17 million meals and counting.
When the pressure mounts, Danny turns inwards. “I’ve been on a very powerful spiritual self-discovery journey for many years,” he says.
“I am getting better and better at staying calm, and when things start getting tough, I turn inwards towards that calm.”
“Ladles of Love also talks to me,” says Danny. “The organisation itself encourages me to keep going and keep growing.”
Ladles of Love currently helps provide meals via The Sandwich & Essential Groceries Drive, The Munch Club, various NPOs, Community Kitchens and Soup Kitchens.

What does it take to be a Changemaker?

“We’re living in a crazy world,” says Danny. “One that needs our love. If we don’t operate from a place of love,
then there’s no point in pursuing change.”
“Some people are natural leaders. They can use that ‘power’ for positive change and building a nation
– like Nelson Mandela, or for destruction – like Hitler.
For me, a changemaker has to operate from a place of love.”
“At Ladles of Love, we call ourselves Love Activists,” says Danny. “None of this is possible without love.”
He also emphasises the fact that we must be kind to ourselves first. “It’s about how you talk to yourself and treat yourself.
You need to be able to look in the mirror and say, ‘I love you’. The way you love yourself is how you love everyone else.”
“The pandemic has also shown me that an act of kindness and love cannot just be a once-off thing.
To change the world, we must do something every day.
Smile at a stranger, treat others with respect, donate, give of your time. One step at a time, one act of love at a time.” 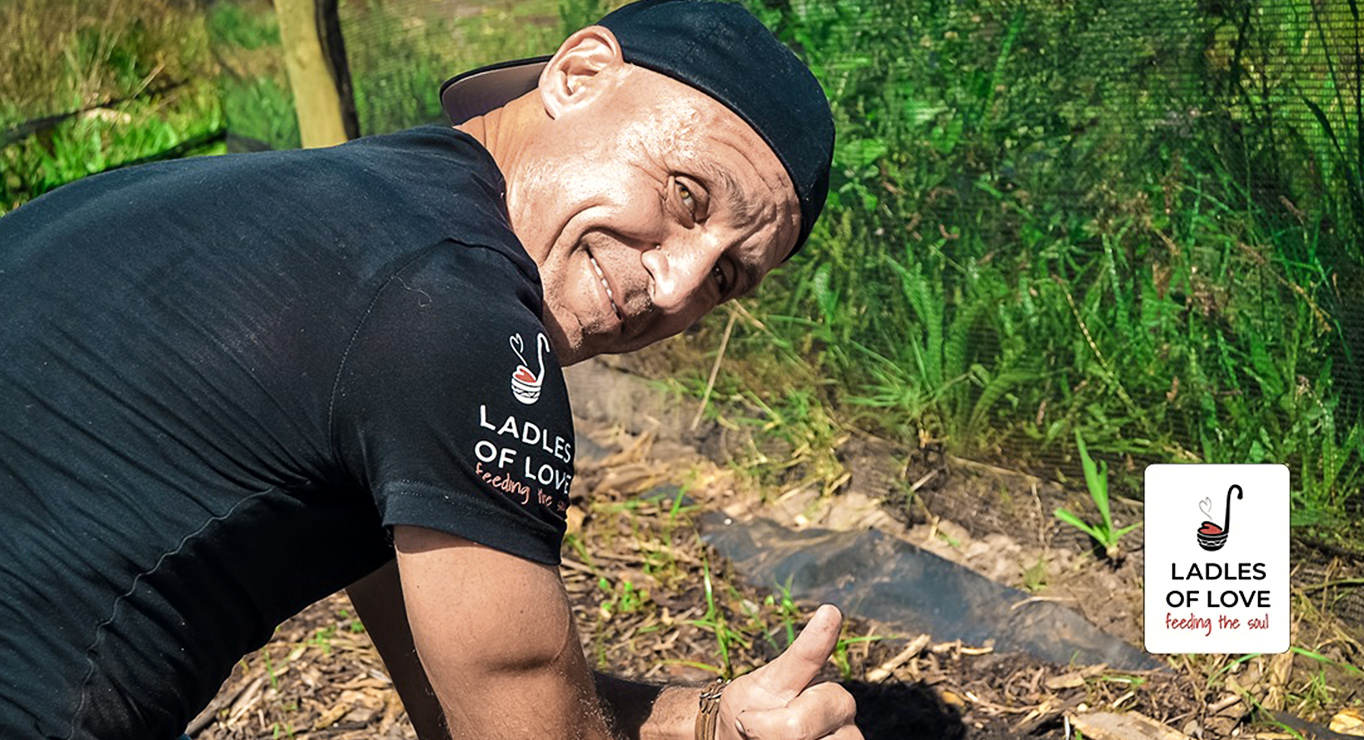